LOGIN
Home / About Us / Board and Committees / Elections – Call for Candidates 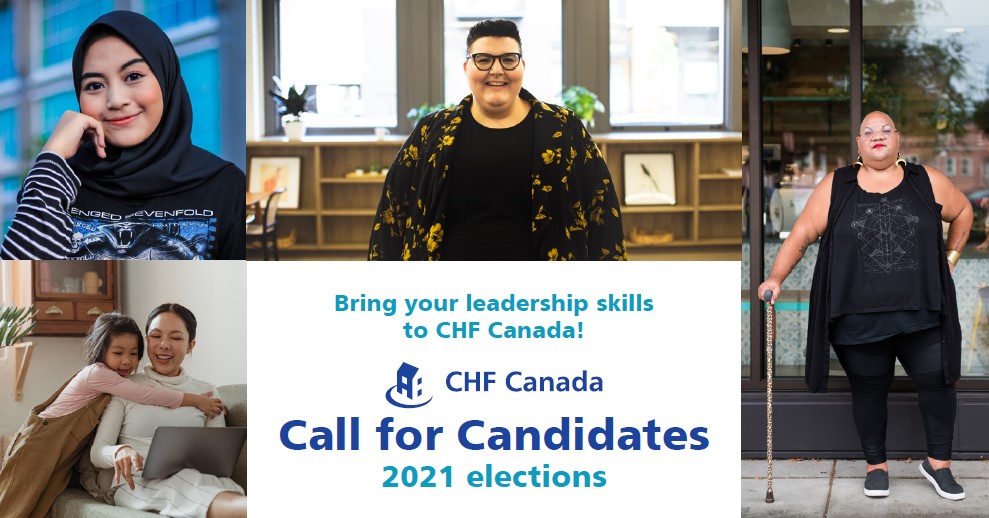 Bring your leadership skills to CHF Canada!
Positions up for election in 2021
Election dates
Nomination process and deadlines
Being on the Board
For more information

Read profiles of the candidates who have been nominated so far!

CHF Canada is looking for qualified people to run for positions on our Board of Directors and Finance and Audit Committee.

Elections for this new governance body will be held in 2021 for all positions.

CHF Canada is a dynamic national association looking for people to represent members and key stakeholders to participate in the governance of a strong federation driven by co-operative values. CHF Canada has over 900 member co-ops, along with regional federations, co-op management companies, staff associations, and many other stakeholder organizations in all parts of Canada.

CHF Canada needs strong leaders, and it starts with you! Here are some of the qualities CHF Canada looks for:

We strongly encourage people from historically underrepresented groups to run, and we commit to making sure your experience is safe and welcoming. We also feel it is very important for our younger members to get involved at a governance level, and so we strongly encourage emerging leaders to consider running for election.

Many new directors have no experience at all in association governance, and that’s okay! CHF Canada offers an excellent governance training program. We’ll help you, as a newly elected leader, to learn the meaning of good governance and how you can contribute to the good governance of your national federation.

Positions up for election in 2021

Elected online April 1 – 21  (Co-ops in these regions will elect their regional director by using an electronic voting system, and will be contacted separately about how to vote.)

Elected at the Virtual AGM

Elected at the Virtual AGM

You can run for these positions if you are:

Regional positions and the Indigenous Communities position will be elected via online elections held April 1 – 21.

At-large positions on the Board and the Finance and Audit Committee position will be elected at the AGM which will be held virtually in June.

You can nominate someone (including yourself) for election by emailing a completed Nomination Form to our office before the nomination deadline. Candidates for all positions must fill out the Confirmation of Good Standing form before their nomination can be accepted. This is to make sure that all candidates are qualified to serve in the position they are seeking.

To send in your nominations:

Email them to CHF Canada’s Corporate Secretary, Christine Seguin, at cseguin@chfcanada.coop. Please make sure your email requests a delivery notification. If you do not have access to email, please contact Karine Ethier at kethier@chfcanada.coop  or 1-800-465-2752 ext. 239 for support in making alternative arrangements.

We strongly encourage all members to declare their nominations as early as possible. We will help candidates by allowing them to tell members about themselves on CHF Canada’s website and on CHF Canada’s electronic voting site (for regional elections).

Nominations are due before 5 pm EST (Eastern Standard Time) on the deadline dates listed above.

Being on the Board

CHF Canada’s Board of Directors governs CHF Canada between annual meetings according to the by-laws and rules approved by the members. It oversees CHF Canada’s operations and sets its priorities based on resolutions passed by its membership. The Board makes sure that CHF Canada’s management is performing well and is accountable to members. Directors serve a three-year term and can be re-elected for up to two consecutive terms.

Time requirements for board meetings:

Videoconference calls may be scheduled between meetings. Directors may also serve on CHF Canada committees or represent CHF Canada with other organizations.

Due to COVID-19 travel and gathering restrictions, the in-person meetings are tentative, with videoconferencing to be used as backup.

What costs are covered?

CHF Canada pays travel and hotel expenses for the Board meetings and annual meetings.

Directors receive a per diem, a daily allowance to cover the cost of meals and other expenses while they are at meetings.

Directors can be reimbursed for child care, care of other dependants and some lost wages.