Highlights from the National Housing Debate 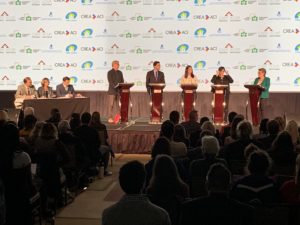 CHF Canada was pleased to hear all political parties commit to maintain rental assistance programs for middle- and low-income people.

“We have renewed and saved the subsidies for the co-op sector. We have created a pathway for reenrollment for those that lost subsidies.”

“Our approach, we are going to continue to increase the Canada social transfer by 3 percent a year and allow the provinces the ability to put those dollars to work in things like housing. But we need maximum flexibility at the local level.”

“We’ve also had a huge gap in the number of co-op housing built that we need to have in order to create that affordable space. We would build capacity for social, community, and affordable housing providers in order to increase supply.”

“Housing is critical, that is clear. Federal incentives for purpose built rental housing were eliminated in the 1970s, and we now face a national shortage of affordable housing, and a growing problem of homelessness and housing security.”