“A hidden gem in the middle of downtown Truro.” That’s how Lauren Steeves describes Hubtown Housing Co-operative, where she lives with her husband, and their now two-year old son.

Lauren’s journey out of and back into the co-op began with receiving a Diversity Scholarship from CHF Canada during her final year of high school. With it, she was able to enroll at Mount St. Vincent University just outside of Halifax, and live on campus the first year. With no student loan pressure, she was able to focus on her studies.

Lauren recalls her childhood in Hubtown as being filled with a strong sense of community.

“I was raised in a single-parent home with three kids, but we never felt like we were going without. Having affordable housing was a major part of that.”

By her third year, Lauren ended up in Truro with her then boyfriend who had found steady work there. When Lauren became pregnant, she realized she wanted to go back to Hubtown. 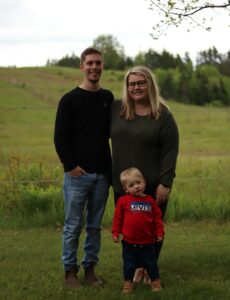 “We were living in a small, one-bedroom, main floor apartment and there were rules like kids weren’t allowed to play on the grass.” There was no mechanism for input into the non-family friendly regulations. “I knew how incredible the co-op was,” she said. “We have the privilege of being able to decide as members what works best for us.”

Her partner had no prior experience living in a co-op, but was immediately drawn in by Lauren’s description of the community-based lifestyle. Lauren and her family went on the waiting list. When their son was four months old, they got the hoped-for call that a townhouse was available. Older members immediately tried to engage her in governance.

“I was encouraged to attend some Board meetings, and after a few, I was hooked.”

Lauren sees the CHF Canada Diversity Scholarships as an investment in future leadership of the co-op.

“You invest in your community members so that they can afford to continue to grow and learn. There’s the support to do better, and it provides you with the funds to do so.”

In the case of Hubtown, investing in Lauren has paid back dividends. She’s now President of the Board and has a second child due in April. She hopes to graduate soon with a Bachelor in Child and Youth Studies.

“I’m planning to finish my degree online, and continue to give back to something that has given me so much.”