The local community and fellow co-ops are answering the call to help several families who lost everything in a devastating fire at Better Living Residential Co-operative, a 50-unit complex of stacked townhouses in east Ottawa.

On April 28, fire ravaged one of their five buildings. Eight homes were gutted, and five others are uninhabitable from smoke and water damage.

When the fire started, says Yvonne, other members of the co-op immediately helped evacuate everyone in the block.  “We are relieved that no one was injured,” says Georgina, though one family pet was lost.

“At first, the Red Cross puts people who aren’t accommodated by friends or family into emergency housing,” says Yvonne, “usually a hotel, looking after their immediate needs for food, clothing and personal items.” Through CHF Canada’s Commercial Insurance program with Co-operators, accommodation costs are covered until the households are able to return to their homes.

A community pulls together to help 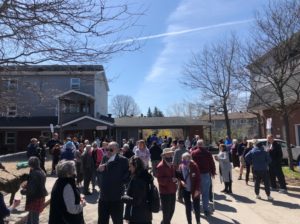 Community members gather at the fundraiser

City councilor Tim Tierney visited the co-op the day after the fire. His team organized a weekend fundraiser at the co-op. Yvonne estimates that about 500 people attended the all-day event, and $21,000 was raised in cash, cheques and gift cards. Others donated clothing, linens, toiletries, food and toys. “Our community room is full almost to the ceiling with donations,” says Georgina.

Donations have also come in from other local housing groups, including other co-ops – one local co-op donated $5,000. More is needed, and the co-op is accepting donations by e-transfer to betterlivingcoop@bellnet.ca to support affected families.

“I can’t speak highly enough about Co-operators,” says Yvonne. “While the fire was still burning, their main local contractor arrived. The next morning, they boarded and fenced the block, so the site was safe. Right away, they coordinated safe access for residents to retrieve some belongings from the damaged homes.”

Co-operators’ claims adjuster also arrived the next morning. “I was so impressed,” Yvonne says. “Co-operators put the co-op and the members first in everything they did.”

For the board and members, the fire also underlined the importance of members having their own contents insurance. Those policies typically include “additional living expenses”, so insured households could quickly get money to pay for food, clothing and other essentials.

“For Co-operators’ MemberGuard clients,” says Yvonne, “the adjuster can provide money immediately.” She says Co-operators and MemberGuard have a huge advantage in working together. “The information sharing between the commercial and household insurance teams is fantastic. That makes it much easier for the co-op, the manager and definitely the households.”

Both Georgina and Yvonne say that there is still lots to be done. Soon, the co-op will turn its attention to assessing the damage, and making plans for reconstruction.

Georgina is most pleased about how Better Living’s members have responded. “This disaster has reconnected the members; there is a renewed sense of community. It’s been traumatic for everyone, so people are taking time to talk with each other. Everyone is being so empathetic and kind.”

Besides making sure your co-op and member households are fully insured, CHF Canada recommends that co-ops use our Risk Management Program to help minimize fire risks and other hazards.