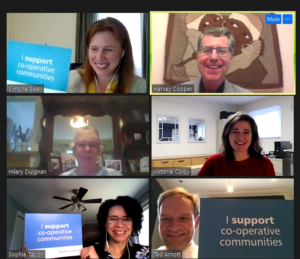 CHF Canada and PHCHF staff meet with Ted Arnott, Wellington-Halton Hills MPP and Speaker of the Legislative Assembly of Ontario[/caption]

Meeting participants promoted the value of the housing co-op model and discussed issues impacting housing co-ops. The key focus was the End of Mortgage issue and our Fix the Formula campaign to solve it.

“Thank you to all the co-op housing members, staff and regional federations who took part in Co-op Housing Day, and those that will be taking part in meetings later this week,” said Government Relations Manager, Simone Swail. “By the end of the week we will have met with 30 MPPs. The meetings have been thoughtful and engaging discussions on the need to keep these valuable communities viable for future generations.”

In Ontario, over 260 provincially funded co-ops are near the end of their mortgages. As a result, many of these co-ops face an uncertain future. An outdated funding formula could put these co-ops – and the low- and modest-income residents who live there – in a worse position.

Without a fix to the funding formula, co-ops may lose crucial funding, which is used to reduce housing charges. This may also leave co-ops without enough money to repair their homes, putting the entire community at risk.

Responding to the call to pass a Fix the Formula resolution in response to the end of mortgage issue, more than 100 co-ops have sent us their resolutions to present to the Minister of Municipal Affairs and Housing. The #FixtheFormula4Coops campaign continues our fine tradition of raising our voices together to protect fellow housing co-ops.

It’s not too late to add your co-op to the list!