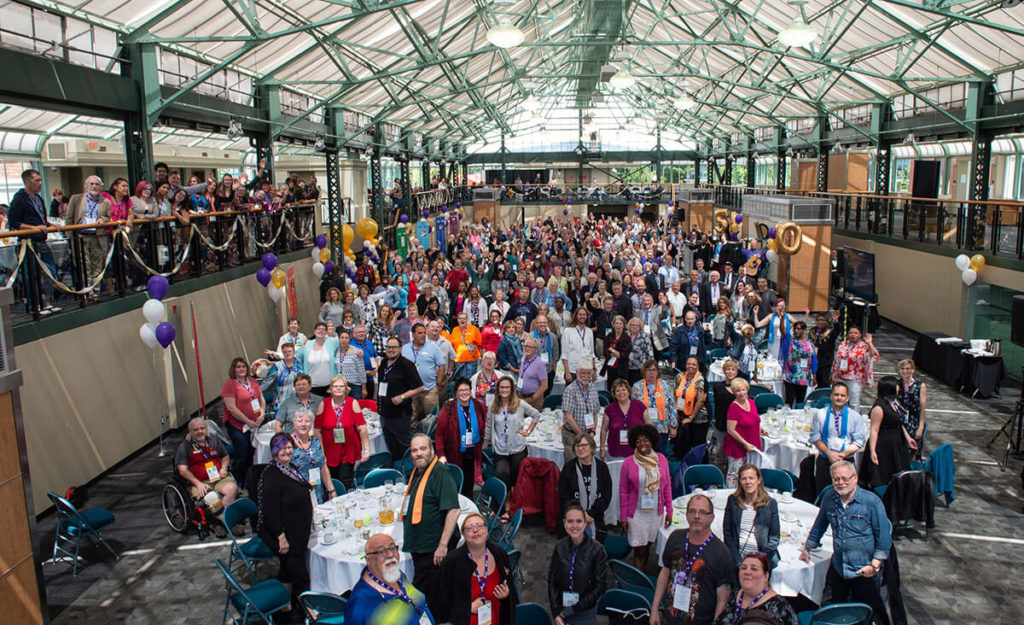 More than 700 housing co-op members and supporters took part in CHF Canada’s 50th anniversary Annual Meeting in Victoria, BC from June 6 to 9, endorsing a vision framework for the future of Canada’s co-op housing movement and mobilizing $1 million in support of new co-op housing development.

Mark your calendars now for June 5 to 8, 2019 for our next meeting in London, Ontario.

At the national business meeting on Saturday, June 9, Adam Vaughan, MP for Spadina-Fort York and Parliamentary Secretary of Housing and Urban Affairs, outlined funding in the National Housing Strategy for the development of more co-op homes.

The meeting also featured an anniversary lunch featuring a CHF Canada time capsule and congratulations on behalf of housing co-ops in the U.S. from the chair of the National Association of Housing Co-operatives, Fred Gibbs.

The Ontario Region business meeting featured a presentation by Dr. Paul Kershaw on the impact of the affordable housing shortage on Ontario’s young adults, and the signing of a historic Memorandum of Co-operation between Ontario’s co-op housing federations and CHF Canada.

During the week, participants chose from scores of workshops at the Member Education Forum, and the Co-operative Management Conference offered professional development opportunities for managers of housing co-ops.

The recipient of CHF Canada’s 2018 Award for Co-operative Achievement is Bain Co-op in Toronto, Ontario for its Honour Canoe Project. Bain was recognized for supporting the 94 calls to action of Canada’s Truth and Reconciliation Commission to “redress the legacy of residential schools and advance the process of Canadian reconciliation”.

CHF BC’s Community Land Trust received the Award for Outstanding Contribution to Co-operative Housing. Their incredible accomplishments developing new co-op housing and redeveloping and expanding existing co-ops are worth recognizing and repeating across the country.

CHF Canada’s 2018 Honorary Lifetime Associate is David Lach, whose dedication to and vision for the co-op business model has helped shape the co-op movement in BC and beyond. A founding member of Quebec Manor Housing Co-op, David was instrumental in founding CHF BC, serving as its first president and helping start COHO Management Services Society. In 1993, David started the Community Housing Land Trust Foundation, and in 2000, he helped found one of North America’s earliest car share co-ops, Modo, which now serves over 17,000 members across British Columbia.