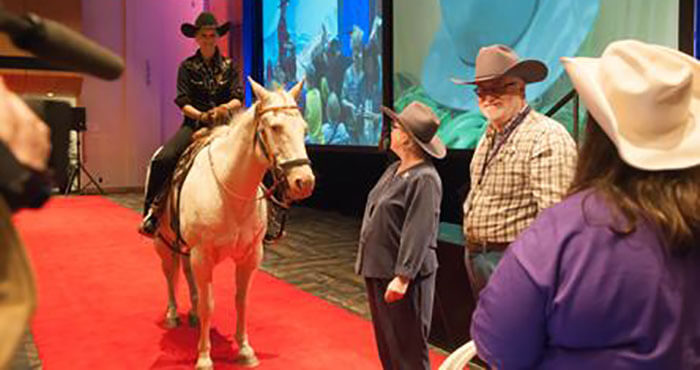 The “hatting” of the co-chairs, Wild Rose country-style, at the start of the 2013 Annual Meeting

Highlights included a talk by Doris Koo from Social Purpose Development Partners in British Columbia. Koo told participants that they could use their over $4 billion in combined real estate assets as an opportunity for creative renewal, intensification and growth.

Presentations focused on expiring subsidies for low-income members as well as the situation for co‑ops in 2020 and beyond.

CHF Canada Executive Director Nicholas Gazzard presented an assessment of the record of Canada’s housing co‑ops and a glimpse at possible future scenarios for our co‑operative enterprises.

Members chose from over 50 workshops at the Member Education Forum, while the Co-operative Management Conference offered professional development opportunities for managers of housing co-operatives.

Social events included a welcome reception, a Taste of the Old West social event at Ranchman’s Cookhouse and Dancehall, a local co-op tour and the annual closing dinner.

CHF Canada’s Award for Co‑operative Achievement was presented to Charles Darrow Housing Co‑op of Aurora, Ontario, for an array of projects that foster social change, community development and environmental sustainability, and that engage young co‑op members and members from underrepresented groups. Charles Darrow developed its Community in Action program in partnership with the Canadian Mental Health Association to address a range of social needs within the co‑op. These include low-income and isolated families, families with underdeveloped coping skills, youth with addiction and mental health issues, children and youth with limited access to outreach programs, lack of connection with other co‑ops, lack of member participation, and language and cultural barriers. Innovations included an afterschool program, youth group, youth leadership training course, “Rainbows” program for children dealing with loss, monthly recreational bus trips, and school-break activities.

Stuart Thomas was named Honorary Lifetime Associate for 2013 for his long and valuable service to CHF Canada. He has been at the forefront of Canada’s co‑operative housing movement since 1979. Among his firsts, Stuart was the first British Columbia regional director on CHF Canada’s board, its first elected treasurer, a founding trustee of the Federal Co‑operative Housing Stabilization Fund and was appointed to the first board of the Agency for Co‑operative Housing. He pioneered the idea of a Co‑op Housing Investment Pool, which earned housing co‑ops a higher rate of interest on deposits and created revenue for federation operations. He also wrote the business plan for COHO Management Services Society in BC and went on to serve on its board for 10 years. Stuart is a founding partner in Terra Housing Consultants, which assists community-based organizations to develop affordable housing. Terra has worked with over 140 clients to develop 13,000 units of affordable housing and is part of Social Purpose Development Partners Inc.

Carol Davis received the CMHC Award for Outstanding Contribution to Co‑op Housing.  She has devoted years to serving the co‑operative housing movement of Canada, through committee work, directorship and management. Her extensive experience includes having served as a founding director of the Agency for Co‑operative Housing. She also served as a member of CHF Canada’s Finance and Audit Committee. Carol was a founding member of the Southern Alberta Co‑operative Housing Association (SACHA). She joined the co‑operative housing movement in 1969 as a founding member of Sarcee Meadows Housing Co‑op in Calgary, where she served 15 years as general manager and remains a member to this day. Before her work at Sarcee Meadows, she was the executive director of AHEAD, a Calgary-based co‑op housing development group. Carol also served as a citizen member of the City of Calgary Planning Committee for the CFB lands.

Thanks to COHO Management Society and COHO Repair Services who sponsored the opening reception.

Visit our AGM photo gallery to enjoy some of the highlights of the meeting.