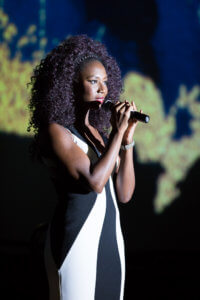 Delegates were entertained and inspired by performances from Domanique Grant as part of a special Mark Goldblatt co-op legacy project.

At the AGM opening, Adam Vaughan, MP for Spadina-Fort York and Parliamentary Secretary to the Minister Responsible for CMHC, gave a thrilling speech about the potential for co-ops to be a significant part of a renewed national focus on addressing the housing needs of Canadians and particularly Canada’s Indigenous peoples.

The meeting also featured an address by Ralph Marcus, chair of the National Association of Housing Co-operatives from the U.S. and a keynote speech by Kishone Roy, executive director of the BC Non-Profit Housing Association about exciting new partnerships between BC’s co-op and non-profit housing associations.

At their meeting on Friday, Ontario delegates gave a standing ovation in response to an address from Ontario Minister of Municipal Affairs and Housing Chris Ballard.

During the week, participants chose from scores of workshops at the Member Education Forum, and the Co-operative Management Conference offered professional development opportunities for managers of housing co-ops.

The recipient of CHF Canada’s 2017 Award for Co-operative Achievement was Sarcee Meadows Housing Co-op in Calgary, Alberta for starting a Women’s Circle to learn about each other’s cultures. The co-op is being recognized for building bridges in their community, living diversity, and reminding us that everyone benefits when all cultures are welcomed and included.

Diane Miles was named Honourary Lifetime Associate. In 2016, after a 40-year career in housing, mainly co-op housing, she retired as Manager, Co-operative Services at CHF Canada’s Ontario Region. Diane left her legacy in every corner of the work done for Ontario co-ops. Diane was a steady hand who provided co-ops with professional, practical advice as they dealt with change and upheaval. Throughout every major co-op housing issue and program change in Ontario, Diane was there, helping members adjust to the new ways of doing things.

Liberal MP for Spadina-Fort York Adam Vaughan received the Award for Outstanding Contribution to Co-operative Housing. Adam has long been recognized as a co-op housing champion, ever since he was first elected to Toronto City Council in 2006. As part of the new Liberal government elected in 2015, Adam has established himself as one of the most influential MPs on Parliament Hill, especially on housing, most recently as Parliamentary Secretary to the Minister Responsible for CMHC, Jean-Yves Duclos. He has been a leading force behind the development of a National Housing Strategy. Adam has also campaigned fiercely on behalf of extending rent-geared-to-income subsidies.

“We will work to bring our financial and real estate assets to the table in partnership with government and the private sector to develop secure, community-oriented affordable co-op housing for the benefit of Canadians.”