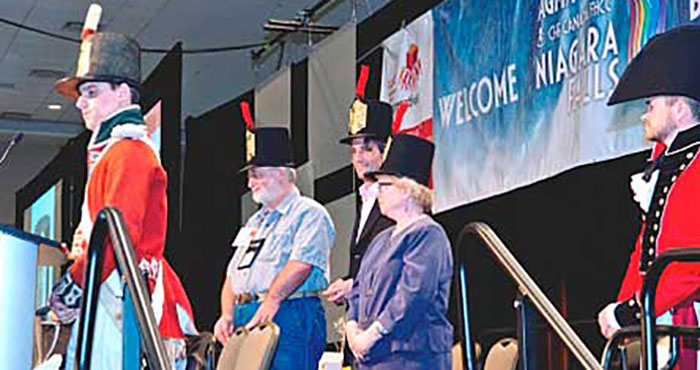 Meeting chairs Bruce Woodrow, Geoffrey Dabbs and Noreen Dunphy receive their headgear during the traditional hat ceremony themed on the War of 1812.

The United Nations International Year of Co‑operatives (IYC) was a central focus of the AGM with a stellar lineup of special presentations.

In the annual report to members, CHF Canada President Wes Hosler and Executive Director Nicholas Gazzard outlined how CHF Canada focused on good governance during 2011, the Year of Getting Governance Right. They also spoke about the link in 2012 between IYC and CHF Canada’s Year of Getting Management Right. And they emphasized the importance of the challenge facing federal Section 95 co‑ops with the end of operating agreements.

The AGM saw Wes Hosler step down as president after many years of dedicated service to CHF Canada. CHF Canada’s new president is Anne Davidson.

Delegates also heard about the follow-up to last year’s resolutions in support of young co‑op leaders, which included the development of a young member engagement strategy for the co‑op housing movement. The follow-up also involved the collection of information about the number of young directors on boards of directors.

CHF Canada’s first Award for Co‑operative Achievement was presented to Hamilton’s Halam Park Housing Co‑op. This new award recognizes an inspiring achievement by a CHF Canada member that creates a lasting legacy. Halam Park’s IYC legacy project involves the construction of eight new one-bedroom units on co‑op land to support the needs of seniors, empty-nesters and small households. The entire co‑op supports the project with the belief that it is its responsibility to provide the best housing options for families, seniors and children.

Barb Millsap was named CHF Canada’s Honorary Life Associate for 2012.  Barb has been active in the co‑operative housing movement since the early 1980s when she moved into a housing co‑op in Saskatoon and became manager of another co‑op. Barb worked as a housing co‑op manager and leader for over a decade in Saskatchewan, Alberta and Northern Ontario. And she served with distinction as President of CHF Canada. Barb is currently President of CHF Canada’s Ontario Council and active in the management of three housing co‑operatives in Northern Ontario.

Denyse Guy, Executive Director of the Canadian Co‑operative Association (CCA), received the CMHC Award for Outstanding Contribution to Co‑op Housing. Prior to her current position with CCA, Denyse worked as Executive Director of the Ontario Co‑operative Association (On Co‑op) and as coordinator of Windfield Co‑operative Homes in Guelph, Ontario. “Denyse’s excellent work at the management level for a housing co‑op was first recognized in 1999 when she received the award for Best Managed Housing Co‑operative in Canada,” said CHF Canada President Wes Hosler. “Now at the helm of CCA, she is providing both leadership and direction for Canada’s co‑op movement during the International Year of Co‑operatives.”

Thanks also to the Government of Nova Scotia and the Manitoba Co‑op Promotions Board for bursaries that helped many housing co‑op representatives from these provinces attend the AGM and workshops.

Visit our photo gallery to enjoy some of the highlights of the meeting.

Members passed resolutions, elected representatives to the Board of Directors, Ontario Council and Finance and Audit Committee, and honoured co-ops and individuals who have contributed significantly to the co‑operative housing movement in Canada.