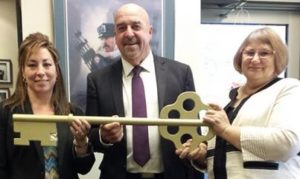 In 2014, the end of federal operating agreements became a hot topic. Castlegreen Housing Co-op in Thunder Bay, Ontario, grew concerned. Members worried that their most vulnerable households would be in danger of losing their homes if they no longer received a geared-to-income subsidy. Although Castlegreen’s operating agreement wouldn’t expire for several years, members wanted to help their fellow co-ops, which were in more immediate danger.

In a stand with co-ops across the country, Castlegreen supported You Hold the Key, CHF Canada’s campaign to help low-income Canadians whose housing was threatened by the expiring federal operating agreements. Like dozens of other Ontario co-ops, they passed a You Hold the Key resolution, calling on all levels of government to find a permanent solution to the issue.

But Castlegreen didn’t stop there.

Working with CHF Canada, the co-op approached Thunder Bay City Council and explained how the issue, if left unresolved, could add even more households to the city’s social housing waitlists – which had already more than doubled in the past 10 years.

City Council invited Castlegreen manager Sharon Carolan-McKinnon to make a deputation on behalf of area co-ops. The result: With the support of Mayor Keith Hobbs, the City of Thunder Bay passed a You Hold the Key resolution, with copies sent to its provincial and federal representatives as well as to cabinet members.

In Budget 2017, the federal government committed to replacing expiring federal rent subsidies, promising to put a plan in place before 2018. Castlegreen’s local lobbying, together with other politically active CHF Canada member co-ops across the country, was a big part of this success.

What can you and your co-op do? Check out the Protect co-op housing campaign for the latest news.