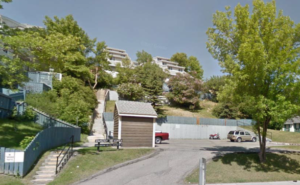 Housing co-ops built on hills face special challenges as they get older, and Ramsay Heights Co-op in Calgary is one of them. This 37-unit co-op was built in 1977 on a very steep hill in southeast Calgary, near the Calgary Stampede grounds.

From the co-op’s street front to the top of the highest home, the site rises to the height of an eight-story building. Members use 462 outdoor steps to get to their homes. Multiple retaining walls, some as high as 11 feet, stabilize the terrain, keeping the buildings and yards from sliding down the hill.

In 2016, Ramsay Heights’ building condition assessment showed that one of its vital retaining walls would soon fail. Others needed replacement, as soon as the co-op could get the work done.  “The engineers told us that the problem was inescapable and urgent. We had to act right away,” says Colin Tomlins, a long-time resident of Ramsay Heights currently serving his third term on the board.

Ramsay Heights was facing an expensive fix. The co-op had known for some time that new borrowing could replace its existing fixed-rate CMHC mortgage, with interest at more than ten percent. So the co-op contacted CHF Canada for help. It has become the first co-op in Calgary to be refinanced using CHF Canada’s Financial Planning Services. 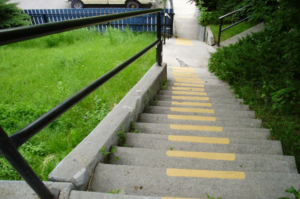 Colin Tomlins credits CHF Canada for a successful outcome. “Everyone on our board realizes that without outside assistance, this couldn’t have happened. We wouldn’t have made it through the door at a financial institution on our own,” he says. “CHF Canada made sure that we could talk to the credit union in a way that they understood, and handled a ton of paperwork.”

“Our manager was also essential. She needed to respond quickly to requests for documents and studies to support our loan request, and she went to great lengths to ensure that every deadline was met.”

CHF Canada’s Asset Management and Financial Planning Services helped the co-op prepare an asset management plan, and helped organize the property appraisal, environmental assessment and financial forecasts needed to approach Connect First. They advised the co-op on the terms and conditions of the mortgage, using the experience of the many other co-ops that have arranged credit union lending through CHF Canada.

CHF Canada’s Asset Management Services staff are helping the co-op tender for project management and with other post-funding tasks.

Dave Howard, CHF Canada’s Program Manager, Financial Planning Services, calls Ramsay Heights a “textbook case” of how new financing makes sense. “It spreads the cost of major repairs over several years, so that the co-op can afford them within normal operating costs, and can put more money into reserves,” he says. “A new loan is often much cheaper to repay than the older mortgage – in this case a smaller amount and a much lower interest rate – so that Ramsay Heights can build its reserves much more quickly than it could in the past, and look after its future needs.”

Colin Tomlins expects that the work will begin this spring, and will continue for a few years, as the walls are gradually replaced. “The new mortgage allows us to continue to implement modest increases in housing charges. Keeping our housing as affordable as possible is our main goal as a housing co-op.”