Aging in Place: Staying connected to family and community 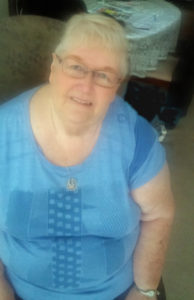 Provie Dyck has lived at HW Flesher Housing Co‑operative in Vancouver since 1991. She was widowed soon after moving into the co‑op and has raised her youngest daughter there.

“I could have moved out and bought into the market after my husband passed away, but I love living in this community”. She said “out of the 100 units here, I had 99 people knocking on my door bringing me casseroles after my husband’s death. My neighbours also took my daughter to school.”

Three years ago, Provie had some serious health concerns. The extra driving that resulted from Provie’s increased health needs, such as taking her to medical appointments, was adding extra stress to her family.

During her recovery, a three-bedroom unit became available at the co‑op, says Provie. “I asked the membership committee if they would allow me to move into a three-bedroom unit, and invite my daughter and son-in-law to live with me. The membership committee approved the move, and the Board okayed a deviation from their over-housing policy” to allow Provie to move into the unit in advance of her daughter and son-in–law.

The household now pools their resources and shares expenses and household chores. “My daughter does the grocery shopping, and my son-in-law, who is a short order cook, does the cooking.”

Provie has grab bars installed in the bathroom, and has received approval to install a chair lift. “The co‑op won’t pay for the lift, but there are grants out there for this, and someone in the co‑op is applying for funding to have this done.”

HW Flesher members use social media as a communication tool. “If I need something done,” says Provie, “I can post on the Facebook page, and somebody will drop by or call me within an hour.” New technologies can minimize social isolation of all members, especially those with mobility or health issues.

Provie says “The co‑op must look at seniors in a different way. Listen to us! We have years of experience. I’m not saying seniors are right, but we do have experience. Rely on those older members; they know more than you think!”

A creative and flexible board of directors, a caring community, minor physical upgrades, and communication tools have helped this co‑op keep their older members engaged and contributing to their community.

This profile originally appeared in CHF Canda’s eNews in 2016.