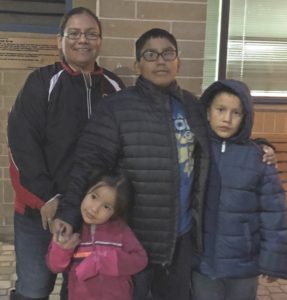 When Roanna Hall moved into Payuk Inter-Tribal Housing Co-op in Winnipeg on a cold February day in 2006, she didn’t even know she was moving into a co-op.

“I thought it was just like any other apartment,” she laughed. Within a few months, Hall was sitting on the board of her co-op.  She has recently finished her fourth term as president!

“I read the handbook, and my neighbour had a friend who explained to me what it was all about,” said Hall. When asked what drew her to seek a position on the Board, she said it was having a say in how the co-op was governed. “We have more of a say in how our building is run. We’re more independent, more stable. We’re there for each other.”

Hall spent her first two terms as a board member observing and listening. A woman who worked for the property management company at the time invited Hall to workshops and training opportunities offered by Manitoba Housing. This support encouraged her eventually to seek to become president.

She has also had the opportunity to attend CHF Canada education events. “They were good, very informative,” she said. Last June, the co-op sent two board members to Victoria for the Annual Meeting, where Hall ran for the position of Aboriginal Director.

Hall is pleased with the co-op’s achievements. Payuk recently received $2.175 million through the National Housing Strategy. “We pushed hard for those funds,” she said.

“Our windows were wooden frames, and they were rotting.” The grant has allowed the co-op to install LED lighting in the hallways and common areas, and improve the ventilation throughout the building. The co-op plans to replace windows and balcony doors, install fans in the bathrooms and range hoods in the kitchens, and replace the elevator.

Encouraging more involvement from members has been an ongoing mission for Hall, who has organized community clean-ups, and makes a point of listening to members who come to her.

“One thing that’s important to remember,” she said, “is that the only time you’re a board member is when you are sitting in the board room. The rest of the time, you’re a member like everyone else. People come. I’ll listen. But I know where to draw that line.” Hall believes her upbringing was instrumental in equipping her with the skills she puts to work in her co-op – treating people equally and fairly, and taking a moment to listen.

“Co-ops are a good housing model,” she said. “A sense of home is there. Once you get living there and feeling involved, it’s like it’s your own home.”