#HumansOfCoopHousing:  Sandra worked with other members to create their new co-op

Sandra Hardy lives at Old Grace Housing Co-op in Winnipeg and has seen the development of the co-op from just an idea to a full-fledged community.  Here’s what the co-op movement has meant for her: 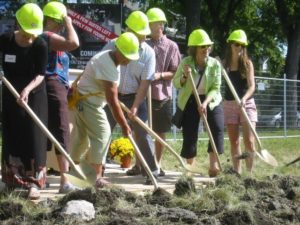 The journey started in 2012 when the Manitoba provincial government announced that the former site of the Grace Hospital in central Winnipeg would be available for redevelopment. Along with other local residents and community activists, Sandra was a member of the steering committee that developed a proposal for a co-op that would provide affordable housing for a diverse mixed-income community.

The development team worked collaboratively, raising over $3.6 million in member shares as well as fundraising a further $200,000 to ensure the shares could be affordable for even the lowest income co-op members. In addition, they secured a $2.8 million loan from the Province for construction and leased the land at a nominal cost. Today, Old Grace Housing Co-op is an affordable option for 64 families in Winnipeg.

Sandra was the president of the Old Grace Housing Co-op and the chair of its building committee during most of its development and all of its construction. She says, “There’s a dearth of affordable housing in Manitoba and in Canada, co-operative housing is really a fine model and we need continued government support to develop more.”

To Sandra, the co-op movement means people working together to take greater control of their own destiny. She is a strong co-op supporter.

Throughout 2020, our Humans of Co-op Housing series will feature individuals who are making their co-ops a better place or speaking up for the importance of co-op housing. Let us know at info@chfcanada.coop who you’d like to see featured next.