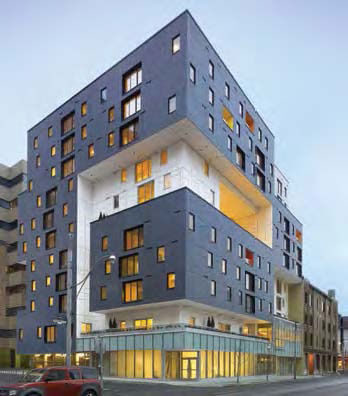 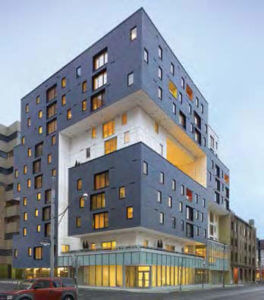 Toronto Councillor Pam McConnell had multiple pieces to a puzzle:

McConnell, who raised her family in co-op housing, fit the pieces together. The result: a partnership that led to the beautiful and innovative Local 75 (Hospitality Workers) Housing Co-op in the heart of downtown Toronto, which opened in 2010.

Along with 85 co-op homes, the Local 75 building also houses the non-profit Hospitality Workers Training Centre and its social enterprise restaurant, Hawthorne Food and Drink. In 2016, Now magazine called Hawthorne Food and Drink “one of the city’s tastiest social enterprises.” Employers have taken notice too; they know that hiring graduates from the training centre saves them time and money.

Designed by Teeple Architects, the award-winning building is a striking example of an urban landfill project. As the jury presenting the 2014 Governor General’s Medal in Architecture commented: “It is extremely gratifying to see a social housing project rise so far above mere accommodation.”

Co-op housing, training centre and restaurant rolled into one. Now that’s some food for thought!