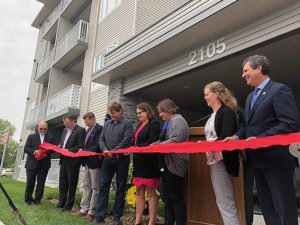 You might think that the members of the Western Manitoba Seniors Non-Profit Housing Co-operative would have been satisfied with finishing their 2013 development of 34 affordable homes in Brandon Manitoba. If so, you would be wrong.

When two city councillors contacted the co-op that same year, to propose that a little-used city-owned baseball field could be developed for affordable seniors housing, they responded. Co-op President Harvey Douglas knew firsthand from the co-op’s waiting lists that seniors housing in Brandon was badly needed.

“Western MB Seniors’ new  development  shows how partnerships among housing co-operatives and governments can deliver new co-op housing to solve housing shortages,” said Blair Hamilton, CHF Canada Program Manager for Manitoba.  “All three levels of government are rightfully taking a lot of pride in the collaboration that made this new housing happen.”

Each partner helped to keep the housing affordable. The City of Brandon transferred the land to the co-op at no cost, and provided a long term reduction in municipal taxes. The governments of Canada and Manitoba, through Canada Mortgage and Housing Corporation and Manitoba Housing, added a $3.1 million capital contribution in the form of a 15-year forgivable loan.

Western MB Seniors itself raised $2 million in share capital from incoming members (who receive their share value back when they leave the co-op). The co-op secured a $6 million 35-year mortgage from Westoba Credit Union.

The partners’ affordability goals were met – of the 63 new apartments, market value rental rates are charged on just fifteen; housing charges on the other 48 are set below market, adjusted annually based on CMHC market data. The building is accessible, visitable, smoke-free and pet friendly, with common areas on each floor, an outdoor sitting area and a shared garden.  The co-op says that it will allow its members to age in place gracefully.

Even with 97 units now occupied, the co-op’s commitment to address Brandon’s seniors housing shortage has not decreased.

“Our co-op volunteers thank everyone who helped to make this dream a reality for the people now living in the co-op,” said Harvey Douglas. “We will always be looking forward to more opportunities to provide housing options for our seniors’ community.”