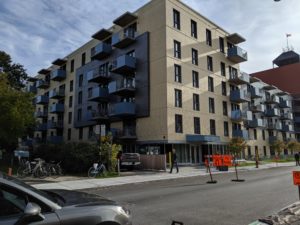 Isabelle Anguita has been living in Montreal’s Mile End neighborhood for 25 years.

Ten years ago, she realized that gentrification was displacing people from her neighborhood, particularly low-income residents and artists. It was at this time that Isabelle and other founding members considered the possibility of using the co-operative model to develop an eco-village. The 92 units in Mile End Housing Co-operative offer a social and economic mix that favors residents from the neighborhood in the member selection process. There’s also a daycare center where co-op members have priority. 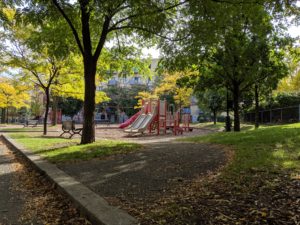 At first, the members had grand visions for their ecological co-op, but the high costs of certain items led to some compromises. For example, since geothermal energy was too expensive, they chose a heat recovery system that circulates hot air from mechanical systems into the homes. “I have never had such low energy bills in my life,” says Isabelle, who has been living in the co-op since January.

“A certain openness to collective and democratic life is necessary to live in a housing co-op,” admits Isabelle who is loving her new co-op life. There is a lot of decision making and all the members contribute. “Here in Mile End Co-op we are lucky to have people with so many different abilities and it’s amazing how my social networks have expanded since my involvement with the co-op,” says Isabelle.