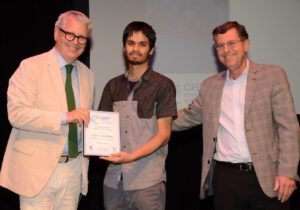 Growing up in Toronto’s Atkinson Co-op, Labib Chowdhury was raised in a culture of volunteering. His father was active on the co-op’s social committee, and from a young age, Labib also got involved in planning and helping out with community events at the co-op.

The redevelopment, which is still ongoing, has involved community members every step of the way, creating opportunities for young leaders like Labib to take an active role.

When he was in Grade 10, Labib got a job as a community animator, helping with the revitalization of his community by informing other residents about the redevelopment and encouraging them to get involved. He also joined the Design Review Panel, and has advocated for the redevelopment to include features like a larger community centre.

“Since then,” Labib says, “my life has taken me towards many directions in finding creative ways to help my community.”

Labib was first elected to Atkinson Co-op’s Board of Directors in March 2017, when he was 19. “I believe it is imperative that any co-op housing include youth in the decision-making process to ensure a youth perspective while also sowing the seeds for future co-op leaders,” he says.

Outside of his co-op, Labib has also volunteered at Kensington Gardens Nursing Home, and leads a kids’ ball hockey program at Scadding Court Community Centre.

“Once people are involved in running their community, they develop a deep sense of responsibility.”

Asked what his advice would be for someone looking to get involved, he suggested:

“It can start with you joining specific events or meetings just to get the experience… You start to see that others are involved for the same reasons you are, and you start to have dialogues with people. Eventually you volunteer more of your time and get comfortable speaking to more people about your ideas and concerns. The hard part is the initial step in trying to get involved, even if it means observing for the first few times.”

Labib is part of a strong tradition of youth leadership at his co-op. He is one of 66 youth from Atkinson Co-op who have received a Diversity Scholarship from the Co-operative Housing Federation of Toronto. He is currently studying at the University of Toronto, and is interested in working in co-op or social housing someday.