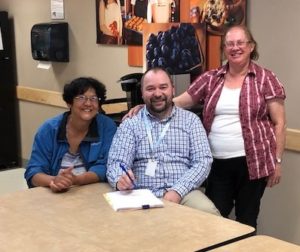 A new housing co-operative in Nova Scotia may hold the key to a successful future for many of the province’s housing co-ops, and help address Nova Scotia’s chronic shortage of affordable housing at the same time.

Compass Nova Scotia was incorporated with support from CHF Canada in 2017. Its purpose is to provide an option for co-ops to come together to benefit from scale and to serve as a vehicle for new co-op growth. Compass could also contribute to stronger governance and better property management.

Compass has hired Earl Mielke, a longtime manager with Nova Scotia Housing, as its first Managing Director and plans to add new co-op development to its accomplishments in 2020.

In late 2019, Compass acquired four small housing co-ops that were under provincial administration, a total of 39 homes. In September 2019, when Central Dartmouth voted to join, Compass has grown to 58 units.

To understand what’s happening with Compass, we need a bit of history.

In the 80s, housing co-op developers in Nova Scotia built or renovated many small properties, many with fewer than 20 homes. Over the years, some of these co-ops struggled with governance, property management and asset management. Some fell into financial difficulty and disrepair. In the 90s, they were part of the portfolio transferred from the federal government to the province—and over the years since, Housing Nova Scotia was forced to take on direct administration of some co-op properties.

From the beginning, the provincial government has seen CHF Canada as an effective partner. A long and positive relationship has flourished, aimed at promoting the success of all of Nova Scotia’s housing co-ops.

By 2016, CHF Canada and the Province had agreed that some co-ops would want the option of being part of a larger enterprise, and so CHF Canada incorporated Compass Nova Scotia under the Nova Scotia Co-operative Associations Act.

Compass’ five-person board is drawn from three classes of members: resident members, non-resident members and organizational members. Its mandate is to “sustain, build and grow inclusive housing co-op communities”.

“Four co-ops were in the care of a liquidator,” says Karen Brodeur, CHF Canada’s Atlantic Region Manager. “With the assistance of CHF Canada, Compass developed a proposal to save the co-ops from being lost to the sector. The transfer of the four co-ops to Compass will ensure their long-term sustainability.”

Democratic governance has been reinstated; on December 16 Compass held its first annual meeting that included board elections by the new Compass members.

But responding to housing co-ops that might want to join Compass is only part of the picture.

“Nova Scotia municipalities, economic development agencies and public health groups are tremendously interested in Compass,” says Mielke. “Housing initiatives in these small towns are much more sustainable when the homes that are built are part of a larger and stronger enterprise. Compass’ size and expertise reduces the risk of history repeating itself.” Facing shortages of affordable housing, municipalities throughout the province are reaching out to Compass to help them turn unused property into affordable co-operative developments.

Opportunities for growth and development

Already, Compass has a new development underway in Shelburne, on Nova Scotia’s south shore, and Mielke expects a busy year in 2020. Other towns have already come calling.

By uniting co-ops for better governance, property management and asset management, and then as a foundation for new development, Compass is an example of a model for the future that has gripped the co-op housing movement across Canada. Using its partnerships among co-op members, co-op service organizations, governments, mortgage financiers and professional property managers, Compass can contribute to addressing Nova Scotia’s affordable housing shortage.