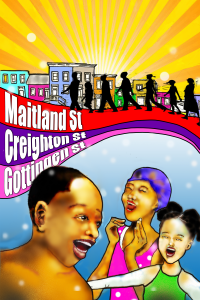 “Progression” by Leticia Adams and Mark Maestro is a collaboration with Compass NS and 902 Man Up to capture the historical perspective and diversity of the Maitland Street project.

Neighbours in Halifax’s North End have good reason to be concerned when there’s a new development project. As expensive new condominiums have marched north from Halifax Commons into the working-class neighbourhood, affordability is being lost. In particular, say critics, gentrification of the North End is pushing out Black Nova Scotians who live there.

Compass Nova Scotia (Compass NS) is hoping to change that. When planning started for its new development of 57 co-op homes on Maitland Street, Compass NS’s board wanted to consult the community to understand local needs, especially among Black Nova Scotians.

To support the co-op housing movement’s vision of Co-op Housing for All, Compass NS is using a unique process to reach out to people in the North End.

Compass NS reached out through United Way Halifax to 902 Man Up, a non-profit group founded in 2016. 902 Man Up is dedicated to socio-economic empowerment, particularly within the Black community. It works for the advancement of all communities at risk of marginalization and exclusion.

Compass NS and 902 Man Up designed a process to make sure that the Maitland Street community voices are heard.

On behalf of Compass NS, 902 Man Up convened three focus groups, including one that brought together Black Nova Scotians who currently or  had previously lived in the North End. A (recorded) Town Hall in August 2021 provided an opportunity for leaders from the Black community to identify goals for the Maitland Street project. It helped participants understand that the purpose of housing co-ops is to provide secure affordable housing that meets members’ needs, putting people before profits.

Compass NS and the community are concentrating on three elements: 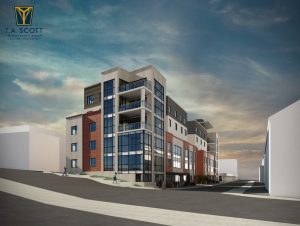 Compass NS currently uses a unit allocation policy that gives priority to people who may struggle to find adequate housing for all of their existing Neighbourhoods..

“We have gathered a lot of information about integrating the new Compass NS Neighbourhood into the community”, says Keith MacDonald, President of Compass NS. “As the project moves to completion, we will continue to engage community leaders.”

CHF Canada’s Executive Director Tim Ross underlines the importance of Co-op Housing for All and co-ops working to help underserved groups in their communities.

“Building more co-ops can establish a foundation for empowerment, social equity and community engagement,” says Tim. “It’s great to see that Compass Nova Scotia has found a way to work directly within the community toward these goals.”