LOGIN
Français
Home / Aging in Place: A leader in governance and renewal

Aging in Place: A leader in governance and renewal 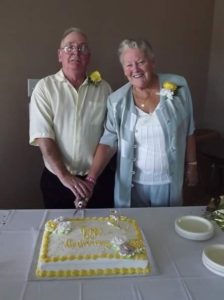 At 74, Donna still serves as a director of the board, and has played a key role in recent changes to the structure of the co‑op. This year, she received an award for services to co‑op housing in New Brunswick. “The co‑op never fails to astonish me,” she said. “It’s nice to be recognized.”

Donna and her husband John were camping 27 years ago when her son told her that he’d put in an application for the couple at the co‑op. “I didn’t know what co‑ops were,” she said, and she was pretty sure she didn’t want to live in one. Now, she wouldn’t leave. “As long as I’m able, and I still have all my faculties, and I can afford it, I’ll stay. I’m secure here. I have friends, and I enjoy being here.”

Donna’s husband died just over a year ago. He was well-known in the co‑op, an accomplished craftsman who was popular with children. “He was known as the Mayor of Elliott Row,” she noted, then laughed. “I never had a title.”

Donna does find it lonely on her own—she was married for 54 years—but the co‑op is home now. “I would rather be alone with my memories than somewhere without them.”

More and more co-op members are choosing to age in place. Aging in place is a process that enables older members to remain in their homes for as long as possible. It can have substantial benefits for older members, their families and the wider co-op community.

CHF Canada’s workplan on aging in place includes illustrating the ways that co-ops can meet the needs of an aging population, for both existing co-op members who want to age in place, as well as future members.

Memories are not all she has made at the co‑op.

Donna has also made history. As a member of the steering committee that considered a merger of eight co‑ops, she was instrumental in helping bring about Unified Saint John. “Honestly, when I first went into this project, I went in negatively,” she explained. “I didn’t like the idea and said to myself, ‘They’re going to have to sell me on this.’ But when I learned more about it, I could see the logic in amalgamating”

“Financially, it made a lot of sense. Small co‑ops are not always able to get capital funding to do major repairs. We got four or five of our big projects done this fall. I put it to people this way: It’s like being in the Bay of Fundy. Would you rather be in a cruise ship or in a rowboat? It’s pretty rocky, and windy out there. Alone, you could drown.”

The amalgamation became official on January 1, 2016.

One member from each of the smaller co‑ops sits on the new Unified Saint John board. “It’s different,” said Donna. “It’s not as close-knit as it used to be, but financially, it’s stronger. We might need a person whose job it is to bring people together, to check in on people, and see how they’re doing.”

Donna works in a local market two days a week, and although she doesn’t drive, she finds it easy to take the bus or walk around uptown Saint John. “Co‑op living has surprised me so much. The co‑op’s really good to people, and it’s a safe place for people to bring up their kids. As long as you work with them, they’ll certainly work with you.”

This profile originally appeared in CHF Canada’s eNews on December 15, 2016.