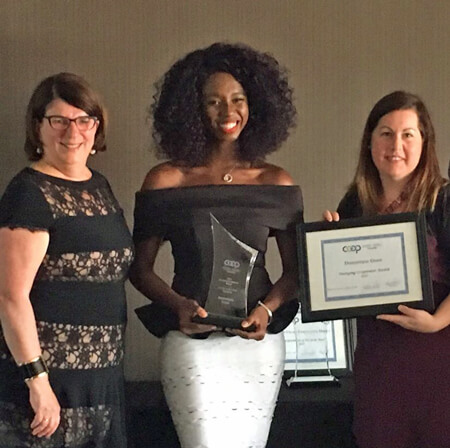 Co-operatives and Mutuals Canada (CMC) held its Co-operative Congress last week in Ottawa, presenting one co-op housing representative a major award and electing another to its board of directors.

CHF Canada’s Director, Strategic Affairs Tim Ross was elected to a three-year term on the CMC board. Tim joins the board just as Nick Sidor concludes his long-standing service as director of Canada’s apex co-operative association.

Domanique Grant received CMC’s Emerging Co‑operator Award honouring someone 35 years of age or less who has made outstanding contributions to co-operative organizations and objectives.   Domanique was nominated by the Co-operative Housing Federation of Toronto (CHFT) for her outstanding contributions in the housing sector.  She has served as president of both Atkinson Housing Co-op and CHFT. She is also a fantastic singer and speaker as anyone who witnessed her performances during CHF Canada’s recent annual meeting in Niagara Falls can attest.

Here is a CMC video profile of Domanique.

“Attending the CMC conference and receiving the Emerging Co-operator Award was an incredible reminder to me of how the leadership that has founded our national movement is being reflected, celebrated and encouraged in emerging leadership today,” says Domanique. “I think it also means recognizing how much bigger the co-op movement is than I understood and how much more room there is to lead with creative and bold thinking.”

Domanique is preparing to release her debut music album PLAYHOUSE and begin a national music tour. Her art is inspired by growing up in a housing co-op, and she’ll be reaching millions of people to have conversations about what home in Canadians cities means and how this will shape the lives of generations to come.