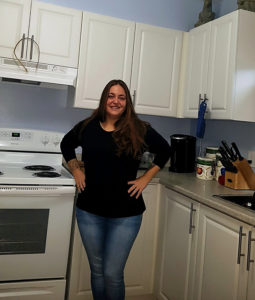 It’s a special day when a Member of Parliament, a Mayor, a city councillor and many municipal election candidates turn up at a co-op event. When the event marks the complete replacement of the co-op’s roofs, siding and doors, along with newly renovated kitchens and bathrooms in every one of the co-op’s 40 homes, it’s exceptional!

On October 19, Preston Heights Housing Co-op in Cambridge Ontario, built in 1984, had plenty to celebrate. After almost a year of construction, members gathered for a barbeque, live band, clown performance, and face painting for the children. They also used the occasion to tell the co-op’s story in person to local politicians.

“We were chasing mold for the whole eight years I have lived here,” says Bailey Kohls, the co-op’s treasurer. “There were so many leaks from our roofs and siding. Our units were in bad shape and we didn’t have nearly enough in our reserves to fix them. So, we had to get a new mortgage; we had no choice.”

“It has just been fabulous. We were cooler this past summer. The new kitchens and bathrooms are fantastic, and I am so excited.”

Co-op manager Allan Steinwell has worked at Preston Heights for four years. Using CHF Canada’s Refinancing Program, Allan co-ordinated the work by the board to arrange its new $3.1 million mortgage. After paying out the existing CMHC mortgage, the co-op had $2.1 million to invest in replacing the co-op’s building envelope.

“Every year,” says Allan Steinwell, “we were spending 70 per cent of our reserves just dealing with leaks and mold.”

As well as the new mortgage signed in November 17, Preston Heights qualified that same October for a grant of nearly $620,000 from CMHC’s renovation and retrofit program. CMHC required that the grant money be spent by the end of February—just four months. “We had to move very quickly, and it was tough. We had to do these repairs in the dead of winter. We waited until spring 2018 to start the roofs and siding at a much less intrusive pace.” 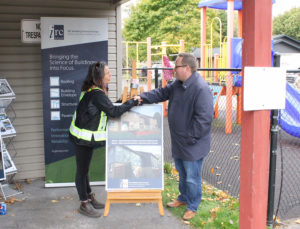 Because it’s a small housing co-op, without much room to increase housing charges, Preston Heights needed a flexible approach to its new financing. Meridian Credit Union stepped in, offering the new mortgage over a 30-year period, rather than the usual 20 or 25 years. This kept the co-op’s monthly mortgage payments affordable, and members have simply taken the normal annual increases to their housing charges. CHF Canada financial consultant Greg Playford says that it’s not normal for a lender to agree to a 30-year amortization period, and he credits Meridian with fully understanding the co-op’s situation.

CHF Canada’s Program Manager, Financial Planning Services, Dave Howard agrees. “The lenders participating in our program understand housing co-ops. They know we are not-for-profit and that we aim to make housing affordable for members. It’s great when lenders tailor their offers to meet a co-op’s specific challenges to modernize and repair.”

“We renovated the roofs right down to the joists,” says Allan Steinwell. “We replaced all the front and back doors. This will make a huge difference in the winter, since the co-op uses electric baseboard heating—that was a big point when members discussed the repairs and the new mortgage.”

Bailey Kohls and Allan Steinwell both credit project manager IRC Building Sciences, and the two principal contractors – Jackson Roofing and Son Contracting, and Hogan’s Canstruct and Son’s Ltd – for working well with the community. “They were wonderful,” says Bailey Kohls. “IRC had our back, and the contractors were great to deal with.”

In fact, the party on October 19 was sponsored and organized by IRC, Jackson and Hogan’s. “They have been in our community for a year,” says Allan Steinwell, “It’s been very good working with them, and it’s a nice way for them to thank the community.”

He underlines the support that the co-op has received in the past from local elected representatives, citing the positive relationships that the co-op has established with MP Brian May, Mayor Doug Craig, and Councillor Donna Reid, who attended the celebration and learned first-hand how the co-op had been improved.

“Elected representatives are important not only to Preston Heights but also to all co-ops. Our celebration was a great opportunity for our members to speak directly with our political friends.”