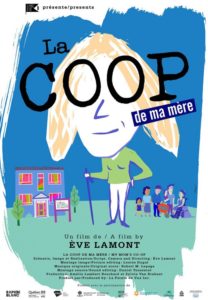 This free screening of this French language film with English subtitles will include an introduction and Q&A with the filmmaker Eve Lamont as well as a door prize draw.

My Mom’s Co-op (Le co-op de ma mère) is an intimate portrait of the filmmaker’s mother, Rachel, and her fellow residents of Gatineau’s St Louis Housing Cooperative. “Before arriving here, I lived in a privately owned rental and I was constantly at my landlord’s mercy,” says Rachel. But St Louis, like all co-ops, is different. It’s owned and managed by members who share control over their individual housing.

And when it comes to this co-op, according to Rachel’s daughter, “it’s an incredible place.” That’s because the residents come from all walks of life. Lizeth and her mother fled Colombian paramilitaries, Henri-Pierre found a home here after his divorce, Ahmed escaped the civil war in Somalia, Melissa was attracted by the co-operative principles, Samira and Sanaa wanted a community like their Moroccan homeland and Jean-Philippe, father to a special needs son, always wanted to help others. All of these people work together to run the co-op. But collective management and participation in a housing co-op is not always easy. It requires know-how.

Filmed over two years, My Mom’s Co-op reveals a place where, despite the challenges of collective management, 40 families successfully resist the pull of the individual. This intercultural, intergenerational melting pot is the new face of the cooperative movement where everyone, no matter their hardships, can find peace, security and most importantly a home. As Rachel says, “the co-operative movement. It’s what makes us prosperous”. Melissa echoes, “this is the future of humanity”.