Call for Candidates: bring your skills to CHF Canada! 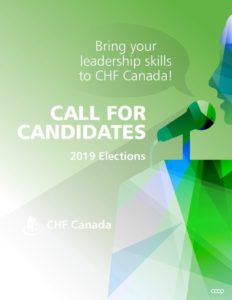 CHF Canada is looking for qualified candidates to run for positions available on our Board of Directors, Ontario Council and Finance and Audit Committee.

Please read the flyer or see below for the positions up for election and the skills we’re looking for.

We welcome and encourage candidates from any and all walks of life and backgrounds (political, religious, colour, race, gender, sexual orientation, country of origin, age, physical ability and income). If you have any questions, you can contact a member of our Nominating Committee – whose contact details are on the flyer, and included below.

Please share this exciting opportunity with members in your co-op.

Positions up for election in 2019

CHF Canada is a dynamic national association looking for people to represent members and key stakeholders to participate in the governance of a strong federation driven by co-operative values. CHF Canada has over 900 member co-ops, along with regional federations, co-op management companies, staff associations, and many other stakeholder organizations in all parts of Canada.

Members look for representation on their governing bodies that mirrors the diversity of people in our housing co-op communities across the country.

CHF Canada needs strong leaders, and it starts with you.

Here are some of the qualities CHF Canada looks for:

We also feel it is very important for our younger members to get involved at a governance level, and so would encourage emerging leaders to consider running for election.

CHF Canada Board of Directors

The Board of Directors governs CHF Canada according to the by-laws and rules approved by the members.

It oversees CHF Canada’s overall direction and is accountable to members.

There are 16 directors on the CHF Canada Board.

Directors serve a three-year term and can be re-elected for up to two consecutive terms.

CHF Canada’s Treasurer, another member of CHF Canada’s Board of Directors, the Treasurer of the Ontario Region, and two members at-large elected at the AGM sit on CHF Canada’s Finance and Audit Committee. Their role is to review CHF Canada’s finances on behalf of the membership, advise the board, and report directly to the members.

You can find more information about the duties of Finance and Audit Committee members on CHF Canada’s website, or call the office at 1-800-465-2752, ext. 234.

There are eight or nine Ontario Council members:

Ontario Council members serve a three-year term and can be re-elected for up to two consecutive terms.

You can run for these positions if you are:

You can nominate someone (including yourself) for election by sending a completed Nomination Form to our office before the nominations deadline.

Candidates for all positions must fill out the Confirmation of Good Standing form before their nomination can be accepted. This is to make sure that all candidates are qualified to serve in the position they are seeking.

To send in your nominations:

Please make sure your email requests a delivery notification.

We strongly encourage all members to declare their nominations as early as possible. We will help candidates by:

The deadline to receive all nominations is March 31!

The nominations deadline for ALL positions up for election this year on the Board of Directors, Finance and Audit Committee and the Ontario Council is 5 p.m. EST (Eastern Standard Time) on Sunday, March 31, 2019. Nominations will be accepted at the CHF Canada national office until that time.

If you would like more information on what’s involved to run for any of these positions, please see “Being on a Board”.

Diversity means (but isn’t limited to):

Please tell your members about this report and about the 2019 AGM elections!