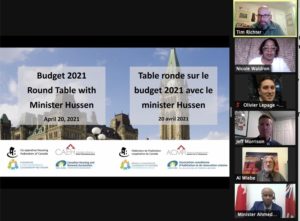 The 40-minute session with the Minister was jointly hosted by CHF Canada, the Canadian Alliance to End Homelessness, the Canadian Housing & Renewal Association and the Canadian Lived Experience Leadership Network. Over 600 participants registered, including many co-op members, housing advocates and service providers.

The Minister cited the renewed Affordable Housing Innovation Fund, which was announced in the budget, as an option to pursue co-op development. He also noted $118 million in the budget to expand the Federal Community Housing Initiative to provide rental assistance to previously excluded federally-administered co-op and non-profit housing providers.

The Minister also answered several questions and comments regarding the lack of a commitment in the budget for an Indigenous Housing Strategy.   He explained that this is still pending recommendations from a Parliamentary committee that studied Urban, Rural and Northern Indigenous housing.

In summary, Minister Hussen said that, taken together, Budget 2021 included “an additional $2.5 billion in different affordable housing related pockets of new money.” He said “we have come a long way, but we’re not there yet in terms of eliminating chronic homelessness.”

You can watch the full meeting recording here.