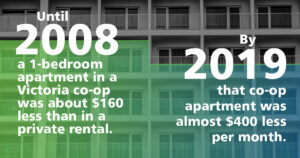 Produced by housing researchers Greg Suttor, Chidom Otogwu and Nick Falvo, the report found that housing charges in co-ops have been consistently lower than rents in comparable buildings in the private market, and that the gap widened over the 16-year study period.

While in the early years, the co-op housing costs were, on average, $150-200 less per month than similar market rental buildings, this gap widened to upwards of $400-500 per month in the later years in all cities, except in Edmonton where the gap is more modest.

This Vancouver Sun article featuring CHF BC CEO Thom Armstrong is based largely on the research findings.