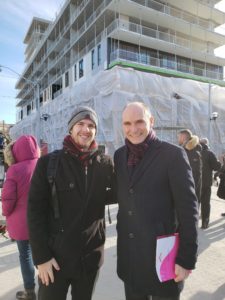 On the first anniversary of the Government of Canada’s release of the National Housing Strategy, Minister Jean-Yves Duclos shared updates on the federal government’s progress towards implementing the Strategy.

Highlights of the announcement included:

The total amount allocated under this initiative between April 2016 and September 2018 has been $5.4 million, supporting 13,330 low-income households.

Tim Ross, CHF Canada’s Executive Director, commented, “This announcement shows the depth of the federal government’s commitment to ending Canada’s housing crisis. The co-operative housing sector is ready to be a partner in making sure that everyone in Canada has a safe and affordable place to live.”