Speak up to support Ontario co-ops 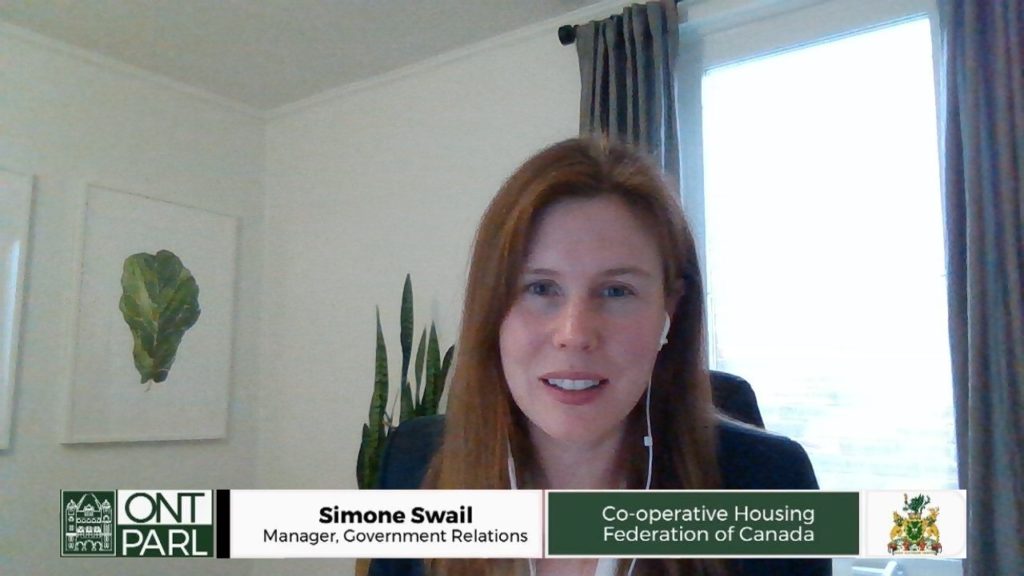 Government Relations Manager Simone Swail appeared this week before Ontario’s Standing Committee on Finance and Economic Affairs. She presented the Committee with our pre-budget submission, recommending a fix to the funding formula for HSA co-ops, and an increase in the supply of community housing, including co-ops.

The provincial government is currently undertaking two important consultations that impact housing co-ops, and a third has wrapped up:

Here is how you can participate in the consultations, to help ensure the concerns and needs of the province’s housing co-ops are best served:

The Co-operative Corporations Act is under review to permanently allow virtual meetings and other electronic processes. This consultation is to get feedback on proposed changes. As we highlighted in the eAlert sent to all Ontario co-ops last week, while CHF Canada supports most of the changes in general, there are two proposed changes we believe will not benefit co-ops.

One is a change to how by-laws are passed. We believe this change is unnecessary, and undermines the democratic nature of co-ops.

The second change would allow any member to ask and receive that a vote be undertaken by secret ballot. Requiring a secret ballot when any one member requests it could be used to delay and obstruct the business of a co-op.

CHF Canada will be responding to the consultation with a formal submission.. We encourage Ontario co-ops, and interested members,  to participate in this public consultation as well.

Fix the Formula at the End of Mortgage

The Ministry of Municipal Affairs and Housing has launched a public consultation on Service Agreements and other regulations under the Housing Services Act (HSA). This directly pertains to the end of mortgage issue facing HSA co-ops, which is the focus of CHF Canada’s #FixtheFormula campaign.

The Service Agreement regulation in particular has the potential to fix the formula for HSA co-ops at the end of mortgage and protect the 21,000 co-op homes at risk.

CHF Canada’s position: We are developing and will email a guide to help co-ops and members participate. We are calling on all co-ops and their supporters to make sure their voice is heard during the consultation.

This consultation started in December, and finished earlier this week. Thanks to everyone who participated. You can read about it on the consultation webpage.