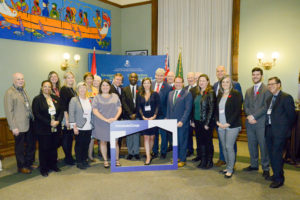 CHF Canada staff, Ontario Council members and representatives from regional co-op housing federations spent the day at the Legislature meeting with MPPs, including the Minister of Municipal Affairs and Housing. The event was an opportunity to promote co-op housing and advocate for protection of Housing Services Act (HSA) co-ops when they come to the end of their mortgages.

The day was successful on many counts:

Does your co-op have an upcoming community event, or would like to invite your MPP for a tour? We can help! Contact Dillon Waldron, Government Relations Co-ordinator, at Dwaldron@chfcanada.coop or 1-800-268-2537, ext. 223.