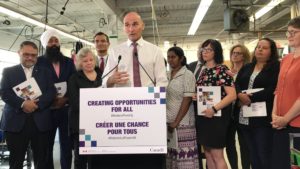 In Vancouver today, Minister of Families, Children and Social Development Jean-Yves Duclos announced the release of the Government of Canada’s Poverty Reduction Strategy.

CHF Canada applauds the federal government’s consultation and strategic goal-setting to halve the incidence of poverty by 2030.

The Poverty Reduction Strategy (PRS) builds off of work by the federal government and $22 billion in spending since 2015. Today’s announcement introduces three key initiatives:

Defining poverty, identifying the amount of need, and bringing those with lived experience to the table are encouraging steps to hold this government and future governments accountable in the delivery of the Strategy. Further, the federal government intends on entrenching these three initiatives in legislation, making it more difficult for future governments to eliminate them.

The PRS sets an official definition of poverty, which did not exist until today. The official poverty line will now be based on the “Market Basket Measure,” which establishes a basket of basic goods and services (including rent and utilities) that families or individuals should be able to afford. If that family or individual cannot afford it, they are considered to be living in poverty. The ‘basket’ is customized to different communities across the country.

An affordable place to live is fundamental to the income security of Canadians, particularly those living in poverty. Nearly one in five renters across the country spend half of the monthly income on housing, demonstrating a clear need for greater housing affordability nation-wide. Canada’s housing co-ops are eager to provide safe, permanently-affordable homes for Canadians and look forward to the delivery of the National Housing Strategy over the next decade.