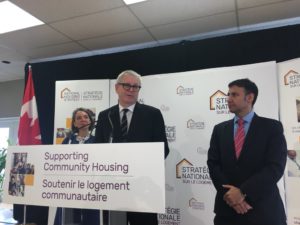 The federal government announced today that the first phase of the Federal Community Housing Initiative (FCHI), one of the programs of the National Housing Strategy will provide continuing assistance to low-income co-op households with federally-administered agreements.

Eligible co-ops have been contacted by CMHC over the past few weeks and finalized agreements were mailed to those co-ops yesterday.

This phase of the program, worth $38 million, will provide support to co-ops whose federally administered operating agreements expire between April 2016 and March 2020. Phase two of the FCHI will continue assistance for low-income households to 2028 for a total investment of $500 million.

“The launch of the Federal Community Housing Initiative is welcome news to CHF Canada’s members, as co-op members in need of continued assistance will be protected,” noted CHF Canada Acting Executive Director Karla Skoutajan. “But we still have more work to do in supporting our members with provincially administered agreements, and we are calling on federal, provincial and territorial governments to act swiftly to protect more households in need of assistance.”

CHF Canada has been working with the federal government since the announcement of the National Housing Strategy to ensure that programs are rolled out in a timely and seamless manner, that assistance is offered at an adequate depth and that the same number of households are supported as in years past.

Adam Vaughan, Parliamentary Secretary to the Minister of Families, Children and Social Development (Housing and Urban Affairs), commented, “For decades, community housing, and in particular the co-op sector, have been important partners in the delivery of Federal housing investments. Sustaining this relationship and making sure residents who are supported by this housing model is critical to the success of the National Housing Strategy.  Phase I is just the beginning, but an important first step, in making sure thousands of Canadians have secure access to affordable housing.”

Assistance for co-ops with provincially administered agreements is expected to be delivered through the Canada Community Housing Initiative (CCHI). The $4.3 billion initiative was announced on November 22, 2017, and is subject to agreement with provinces and territories. CHF Canada is calling on federal, provincial and territorial governments to reach an agreement as soon as possible in order to protect households in need.