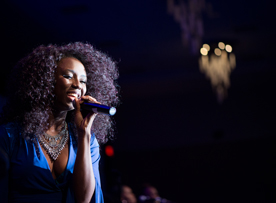 Domanique Grant has been busy.

This fall, she’s bringing her infectious love of housing co-ops to a series of new projects: a video paying tribute to the past, present, and future leaders of the co-operative movement, her debut album, and an interactive exhibit for Toronto’s Nuit Blanche.

Members who attended the 2017 CHF Canada AGM in Niagara Falls will remember Grant’s stirring musical performance there, which is now immortalized in a video showing her deep connection to the co-operative movement.

The singer/songwriter grew up in Toronto’s Atkinson Co-op, received a Diversity Scholarship, was elected president of her co‑op at age 19, and became president of the Co-operative Housing Federation of Toronto (CHFT) at 21.

Grant’s debut album, Playhouse, launches in October 2017. While she describes her music as “fun indie pop”, it addresses serious topics. The central theme of Playhouse is the meaning of home, and in particular, the experiences of Millennials like her, whose paths are more uncertain than those of previous generations.

This would be enough to keep most people busy, but there’s more.

On September 30th, Toronto’s Nuit Blanche takes place: it’s a free, annual art exhibition that takes place in public spaces across Toronto, showcasing art installations by contemporary artists. Grant is collaborating with a diverse team of architects, planners, scenic designers, and interactive designers on a 5,000 square foot exhibition for Nuit Blanche. The team includes designer Carol Ann Apilado and architect and visual artist Javid Jah, as well as the office of  the chief planner for the City of Toronto.

The exhibition will take the form of a series of rooms that will encourage visitors to think about the future of our houses and homes. CHF Canada is helping sponsor Grant’s exhibition to support this innovative and engaging way of promoting co-ops.

In 2016, CHF Canada approached Grant to ask if she would be interested in working on a special project. Housing co-op pioneer Mark Goldblatt, who passed away in 2015, left a bequest earmarked for the creation of a cultural project.

Grant’s project took inspiration from CHF Canada’s Think Young Strategy, the Voicing Our Vision process, and the work of co-op leaders of the past, present, and future:

“I wanted to connect it to what we do every day: it’s our parents traveling hundreds of miles, it’s the neighbourhoods that are imagined before they’re built, it’s the opportunities like the Diversity Scholarship that I received, that show you there are people who believe in you.”

For Grant, exploring the intersections of co-operative living, music, and community engagement is a natural fit: “Everything I’m creating is a direct reflection of getting support through the Diversity Scholarship, and getting to visit so many communities across Canada through my work with CHF Canada and CHFT.”

Travel will be on the agenda for Grant in the coming year, as she embarks on an extensive cross-Canada tour to support her album.   In November, Domanique will bring her inspiring messages about what home means to Canada’s West Coast as a featured performer at the Housing Central Conference in British Columbia which brings the co-op and non-profit housing movements together.

She’s also planning visits to farther-flung locations like Uganda, where she wrote a portion of the album.

For this young musician and advocate, it’s all connected.  As she puts it, “I’m learning that when you’re innovative, and you do what you love, somehow it all comes together!”