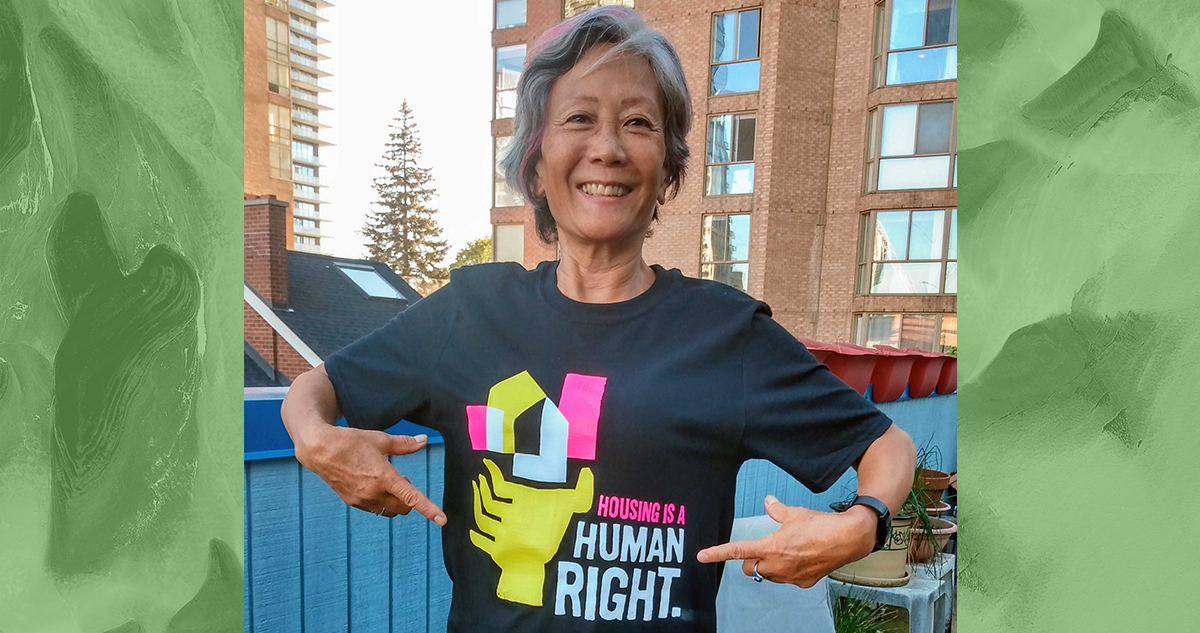 Imagine living in downtown Toronto, walking distance to everything you need, and not paying a small fortune for the privilege. For Dawn Obokata, the dream has been reality. Unsure about the move into St. Nicholas Housing Co-op when it opened over 35 years ago, affordable co-op living turned out to offer everything she wanted.

“A friend who worked for the Co-operative Housing Federation of Toronto (CHFT) told me I should apply. When I heard about the participation requirement, I wasn’t sure if I had the time or the energy. I was expecting my first child, and we both had jobs,” explained Dawn. “We weren’t earning much money with our theatre work, though, so having a place we could afford was important.”

Dawn has acted professionally since 1980, and taught movement skills at the Centre for Indigenous Theatre. Her most recent collaboration is with Yume. Digital Dreams Art Project,  a multi-disciplinary process to showcase the evolving work of Japanese-Canadian artists during a time when physical gatherings have been limited. She also works as an ESL teacher for adult newcomers, a job which has reinforced her belief that everyone has something to contribute. Watching how often people struggle to find suitable housing has only compounded her gratitude.

“Originally, we felt like the poor neighbours, surrounded by luxury condos, but now it’s become the ideal, the dream, to live in a co-op,” she said. “My kids are so grateful for having been raised at St. Nicholas.”

Dawn’s initial anxiety around volunteering soon gave way to participation on various committees, and eventually Board positions. She credits Tom Clement, executive director of CHFT and long-time co-op housing advocate, with encouraging her to spread her wings and run for the CHFT board.

“He’s one of the main reasons I ran. He has so much passion and commitment for co-op housing, and I wanted to share in that. I wasn’t successful the first time I ran, but he told me not to give up, that a lot of people don’t gain a position the first time. So I ran again, and was elected.”

Dawn served as president of CHFT for two and a half years, and for nine years as a national councillor of the Canadian Actors’ Equity Association. She eventually ran for the board of CHF Canada, where she currently holds a position as director-at-large.

“My identity has been at the heart of my theatre work, but I never really thought about it in terms of leadership and equity. We don’t need the “otherness” pointed out. We need to emphasize our commonalities.”

At the same time, she recognizes that not everyone will feel comfortable putting themselves forward, and encouraging diverse voices to come to the table is important. “Sometimes you just need that little nudge; we maybe don’t think of ourselves as ‘that person’.”

Describing herself as a “governance junkie” now, Dawn credits her gratitude and a desire to give back as the driving force behind her continuing leadership roles in the co-op housing sector. She especially enjoys mentoring younger people who come on board.

“Leadership is a renewable resource, and serving on a co-op board is a great training ground. The amount of work that goes on behind the scenes so that people can continue to live in co-op housing is immense. I want to do all I can so that others can have the same opportunity.”