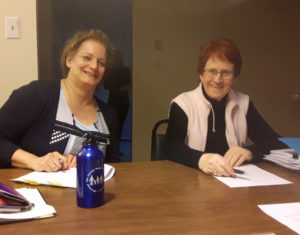 Linda Poulsen thought she was in heaven when she heard the news.

“I’ve been working on this so long. It’s been hard. And all of a sudden, it worked!” Poulsen is president of Quarry Co-op in Ottawa. She is reacting to the successful refinancing of Quarry’s mortgage with Alterna Savings Credit Union.

Quarry is the first Section 61 co-op to take full advantage of CHF Canada’s Refinancing Program. “This is a pretty important deal,” said Dave Howard, CHF Canada Program Manager, Refinancing. “It’s saved them an enormous amount of money, and ensures the co-op can provide for future generations. A lot of people worked together to make this happen.”

Quarry plans to re-invest in the homes of its members. Both exterior and interior renovations are planned. “It’s a relief,” said Patricia DiGiosia, on-site manager at Quarry. “We’re now in a good position to provide affordable housing for the next generation.”

“This will make the houses nicer for people to live in,” said Poulsen, who has lived at Quarry since 1980.

Section 61 co-ops have long-term mortgages with interest rates that are considered high by today’s standards, and there were substantial penalties for paying off those loans and refinancing. CMHC now offers a mortgage prepayment interest relief program for Section 61 co-ops while maintaining rent supplements to the original end date of operating agreements. CHF Canada negotiated for penalty relief, freeing up funds for other endeavours.

“Our refinancing program is really quite successful,” said Linda Stephenson, CHF Canada Program Manager, Corporate Services. “We’re ideally placed to help the co-ops because we care about the co-op’s viability in the long run.”

Quarry appreciated CHF Canada’s involvement. “They’re very hands-on. They’ve showed up, helped out, and will continue to support the co-op throughout the process. There is very little risk and a lot of benefits. It feels like there’s an insurance policy,” said James Calderone of Homestarts. Poulsen agrees. “They got the ball rolling, and talked to us all the time,” she said. “They were great.”

CHF Canada takes a “planning first” with co-ops to create an asset management plan so that co-ops can understand how to renovate their members’ homes and if new financing is an appropriate tool.