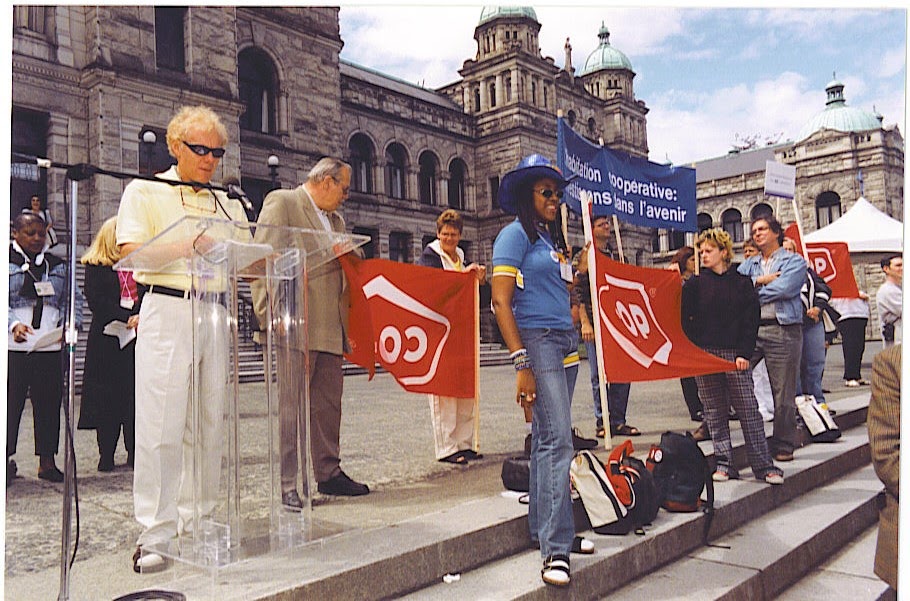 The federal government had announced in 1992 that it was ending its support for new co-ops. Then in 1996, Ottawa declared that the federal co-op housing portfolio would be transferred to provincial administration, including an Ontario government that was openly hostile to affordable housing. 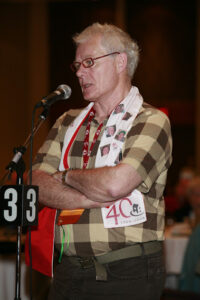 During his five years as president, Wes Hosler was at the heart of several other key co-op housing struggles – to fix leaky co-ops in British Columbia, and to remedy the decline of household assistance for members of Section 95 co-ops.

The sector also had organizational challenges; it was here that Wes Hosler’s experience, leadership, perseverance and courage perhaps showed best. When co-op housing development was stopped, the movement was left with regions without enough co-ops to support local services, or no local organization at all.

Wes Hosler passed away May 6 in Vancouver after a short illness.

Wes first became involved in co-operative housing in 1974, as co-founder of the 152-unit Carpathia Housing Co-op in Winnipeg. In 1988, he joined CHF Canada’s board as Manitoba Regional Director – this began 14 years of outstanding volunteer service as an at-large director, member of the Finance Committee and Treasurer. He was elected president of CHF Canada in 1997, then re-elected for four more terms, serving until 2002 when he stepped down and moved to British Columbia.

After he moved in 2002 to Lore Krill Co-op in Vancouver, his service continued. He became president of the Co-operative Housing Federation of BC, and worked in CHF BC’s education program, facilitating workshops and chairing meetings.

Wes Hosler is remembered as much for his character as his accomplishments. Open-minded and scrupulously fair, with an easy smile and great sense of humour, his approach was always to seek solutions that reflected a consensus. No one ever left a meeting with Wes feeling as if they had been pushed aside or overruled.

“Wes was a friend and mentor for almost 40 years,” says CHF BC Executive Director Thom Armstrong who took his initial workshop leader training with Wes in the early ‘80s. “Wes had the gift of knowing how to lead without ever losing touch. His instinct for what would best serve the sector and the members was unerring.”

CHF Canada President Tina Stevens, who met Wes in 1995 when she joined CHF Canada’s Board as Director Representing Indigenous Communities, says that Wes was “invested as a person in co-op housing. He was loyal to the grassroots members of housing co-ops, and always put their interests first. Everyone who met him remembers his warm smile and many members mourn his passing. I am very thankful to have been able to call him my friend.”

“As a leader, Wes had strong opinions, but he always respected other people’s points of view,” says Rene Daoust, who succeeded Wes as CHF Canada President. “When I was a new board member, I appreciated his support and his mentorship. He was a truly great leader, always seeking positive change to move co-op housing forward.”

Former CHF Canada Executive Director Alexandra Wilson worked closely with Wes for many years. “Who could forget Wes Hosler’s warm and friendly smile”, she says. “He took his duties seriously and with tremendous dedication, with a a true gift for handling disagreements without ever being disagreeable.”

Wes was a registered nurse, and nurse educator, who retired from nursing in 2004. He leaves his three sisters and one brother, and his three children. He was a devoted grandfather.

Wes Hosler will be sadly missed.