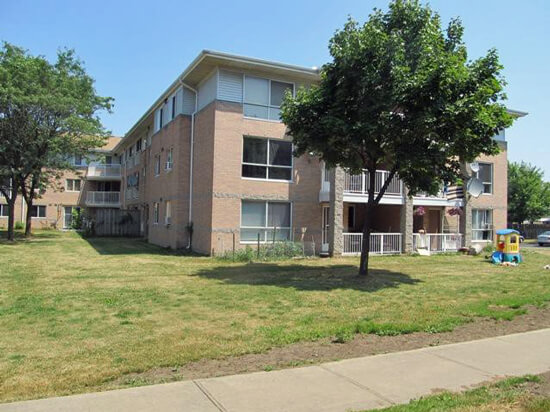 Exciting and long-awaited changes are coming to 232 co-op households throughout Ontario after three more co-ops were approved for loans this summer through CHF Canada’s Refinancing Program.

These three loans total $7.1 million, bringing the total value of refinancing brought about through CHF Canada to more than $65 million. To date, 24 co-ops have refinanced, and another 22 are currently in progress.

Daly Co-operative, an 85-unit co-op in Ottawa, has been approved for a $3.2 million loan from YOUR Credit Union, which will go towards replacing the co-op’s generator, upgrading apartment exhaust systems, and carrying out bathroom renovations.

Westwood Place Housing Co-operative, a 102-unit co-op in Welland (pictured), will receive a $1.9 million loan from Meridian Credit Union. Betty Ann Baker, the Executive Director of Niagara Peninsula Homes, which manages Westwood Place, commented, “This funding will breathe new life into units and common areas that have been sadly neglected due to a lack of resources.”

A 45-unit co-op in Waterloo, Brighton Yards Housing Co-operative, will be using its $2 million loan from Kindred Credit Union to replace windows and exterior cladding, and to renovate members’ kitchens and bathrooms. Kindred Credit Union is the 14th credit union that CHF Canada has worked with for a co-op refinancing. The refinancing program has provided opportunities to strengthen the relationships between housing co-ops and credit unions in the spirit of the sixth co-operative principle, “Co-operation Among Co-operatives.”

Dave Howard, CHF Canada’s Program Manager, Refinancing, commented, “Eventually our co-op homes all need to have repairs and upgrades done, but identifying your co-op’s particular needs and then finding the funding to address them can be challenging for many. It can make such a big difference for a co-op, and we have the people in place at CHF Canada to help guide you through it.”

For more information on refinancing, contact Dave in CHF Canada’s Toronto office at dhoward@chfcanada.coop or 1-800-268-2537 extension 239.