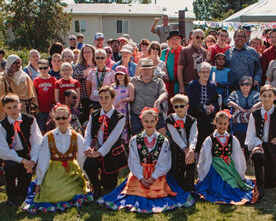 Sarcee Meadows Housing Co-operative’s Women’s Circle capped off a year of recognition and awards with a cultural event that drew a lot of attention and attendance, including Calgary Mayor Naheed Nenshi (check out his speech) and this coverage from CTV news.

The August 19th event was organized by the Women’s Circle and the Social Committee and held in conjunction with their annual summer BBQ. One of the organizers and Circle members Kathy Aubichon said the community is full of anticipation and excitement. “Before the event even happened it was a success.”

Twelve countries were represented at the event, which featured cultural stations where members dressed in culturally-specific attire and offered ethnic food, arts and crafts and entertainment. The Women’s Circle contributed to funding the cultural event with a CHF Canada Diversity Grant and the cash prize from CHF Canada’s 2017 Award for Co-operative Achievement. CHF Canada board members Barbara Millsap and Jacky Durrie attended, along with Mayor Nenshi, Calgary’s Ward 11 Counselor Brian Pincott and two representatives from SACHA.

Since its inception three years ago, the Women’s Circle has been the focus of media attention from Ottawa to New Delhi. It was featured on City TV’s Breakfast Television and honoured in a letter by Canada’s Minister of Public Safety, the Honourable Ralph Goodale.

The Women’s Circle began three years ago when six women in the co-op and their community social worker sat down to learn about each other’s cultures. Beyond having a meaningful impact in the lives of the women involved, the group is changing perceptions and bridging divides outside of their co-op.

CHF Canada produced this video profile of the Women’s Circle. It’s well worth checking out and sharing!