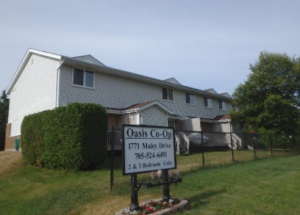 With a new $2.6 million mortgage, Oasis Co-operative Homes is set to fully modernize its 33-year-old townhouses in Sudbury, Ontario. Oasis is the first co-op from the ILM co-op program to arrange its renovations through CHF Canada’s Asset and Financial Planning Services.

This initiative is a welcome new twist to First National’s continuing relationship with co-operative housing as the provider of most of the CMHC-insured Index-Linked Mortgages (ILMs) used by co-ops built between 1987 and 1992.

The new 35-year mortgage will allow the 34-unit co-op to completely repair its brick masonry, vinyl siding, railings, exhaust systems, pumps and piping. All the co-op’s bathrooms and kitchens will be renovated over the next few years.. 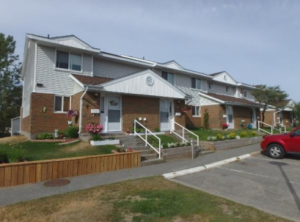 Brent Huot, Oasis’ manager, is a co-op housing veteran. He has followed CHF Canada’s work on co-op planning and renewal since it started a decade ago. “Oasis began detailed planning in 2019, with an update of our building condition assessment,” says Brent. “With CHF Canada’s leadership, we developed an asset management plan that showed us how we could do all the work and set up a new mortgage to make it affordable.”

“Our monthly payment has ended up at less than half of what we were paying before, so we can also use bigger reserve funds to keep our co-op in great shape, for as long as it exists.”

“CHF Canada worked closely with the board to make sure that the details of the Plan were exactly what we wanted,” says Brent. Much of the co-op’s planning costs were offset by CMHC’s Preservation Fund, with CHF Canada helping Oasis access the CMHC money. “It cost us nothing to complete our building condition assessment, asset management plan, and an energy audit – CMHC funding will even cover some of the professional fees to arrange the new mortgage.”

Oasis members, says Brent, could easily see that their housing co-op had visibly deteriorated in the years since it was built, especially the brickwork – a top priority. Proposals for the renovations and the new mortgage were reviewed in detail by the co-op’s members, who decided that a new mortgage was the fastest and most affordable way to modernize and improve the co-op.

“First National was a pleasure to work with; absolutely friendly and very quick with responses to questions or concerns,” says Brent. “We used Zoom to bring everyone to the board table.”

Daniel Bragagnolo is the Assistant Vice President who leads First National’s co-op mortgage team. With more than ten years’ experience, Daniel is one of Canada’s most respected experts on using CMHC-insured mortgages to support co-op goals.

“Since the 1980s, as the main provider of index-linked mortgages, First National has been a supporter of co-op housing,” says Daniel. “Our team is enjoying our more direct role in helping CHF Canada members bring their buildings up to modern standards.”

“We have come to truly appreciate First National’s crossover experience with housing co-ops and CMHC insurance underwriting processes,” says Dave. “Even though using CMHC insurance can be complicated and comes with some fees, it often works well for housing co-ops that need the flexibility and lower interest rates that come with the insurance. Ultimately that means more money can go to repairs and replacements.” He says that First National staff are great to work with.

Many ILM co-ops are coming to the end of their mortgages and have joined the Section 95 and Section 61 co-ops already taking advantage of CHF Canada Asset and Financial Planning Services to modernize their buildings.