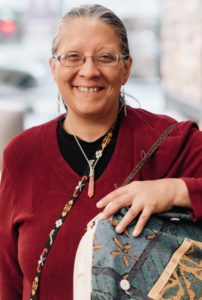 In June 2020, after the Virtual Annual Meeting, CHF Canada’s Board of Directors elected as its new president Tina Stevens, the Director Representing Indigenous Communities.

Tina’s journey with co-operative housing began when her mother, a strong influence in her life, joined as one of the first members of Native Inter-Tribal Housing Co-op in London, Ontario.

She lived in the co-op for around five years as a child, only to return to it later to raise her own three sons. “I’ve left London three times,” she says laughing, “but I keep coming back. My Ojibway name translates into ‘little pigeon’, and that’s what pigeons do. They settle, and always come back to the roost!”

A member of the Loon clan, and of the Kitigan Zibi First Nation, Tina draws strength from her Ojibway roots and believes living in the spirit of the seven Grandfather teachings is key to maintaining healthy communities.

“There are certain teachings that absolutely mirror the principles of co-op housing,” she said. “Co-ops promote equal membership, support everyone having a voice where people speak their truths honestly, and maintain the tradition of helping one another and coming together to contribute to a community.”

Tina originally set out to pursue studies in aeronautic engineering, a quest that led her to California for a while after beginning her program at Ryerson University in the 90s. However, a chance course she took out of interest in administrative studies led her into working with a library board, and eventually she became a Court and Client Representative with the Ministry of the Attorney General in London, ON, a demanding job she currently holds.

Her work led to involvement with the Ontario Public Service Employees Union (OPSEU), where she serves as the Indigenous Circle Director. It was through OPSEU that she became involved with workers at the Children’s Aid Society, promoting cultural awareness through OPSEU’s Indigenous Journey course. Tina enjoys being a part of the Canadian Housing & Renewal Association, the Ontario Non-Profit Housing Association, and the Council of Canadians, and she is the Secretary for the London & District Labour Council.

Within six months of joining Native Inter-Tribal, she was on the board, and soon after became the first Aboriginal Director on CHF Canada’s Board in 1995. An appointment to the Ontario Council, of which she eventually became president, gave her the opportunity to speak from her Indigenous perspective on the issue of affordable housing.

“It was a learning experience that was formative for me,” she said. “Learning about the organization and the broader co-op movement was important, and helped me to become a stronger advocate not just for my own co-op, but for co-op housing in general.”

As President of CHF Canada, Tina is hoping to engage with the federal government on the National Housing Strategy and promote co-op housing as the best model for affordable housing in Canada.

A drummer and a singer, Tina is currently exploring the world of gardening. “I’m not a gardener,” she protests. “This is my first garden. But I’m enjoying it.” Collectively, Tina continues to practise her traditions and teachings as they keep her grounded and give her strength.