CMHC: “Ontario vacancy rate drops to the lowest level since 2000” 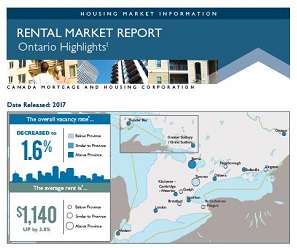 A report on the GTA market shows a grim reality for renting households, with CMHC noting that various factors “rising costs of home ownership and lack of new rental supply kept vacancy rates at historic lows.”

There are individual reports for a dozen Ontario cities. You can browse the CMHC Rental Market Reports for Major Centres to look at average rent and rent increases in your area.