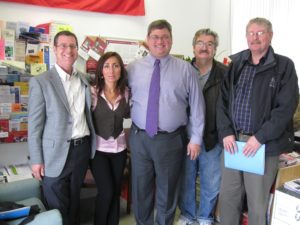 On behalf of Canada’s housing co-operatives, CHF Canada sends our sincere condolences to the family, friends, and colleagues of David Caplan.

Caplan, who served as a Member of Provincial Parliament from 1997 to 2011, including as a term as minister of health, died on Wednesday, July 24th, at the age of 54.

We remember him well as a long time, very strong advocate for affordable housing overall and co-operative housing in particular.

Harvey Cooper, CHF Canada’s Deputy Executive Director notes that “David brought a passion and a profound concern for the well-being of all Ontarians to his many years of service in public life. He had very deep ties to his community of Don Valley East. We remember him constantly visiting housing co-ops and residents in his riding. He will be greatly missed.”